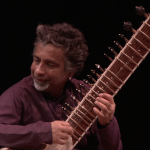 Pandit Kartik Seshadri is a world-renowned force in Indian Classical Music. As a sitarist, he attracted widespread attention when he began performing full-length solos in India from the age of six. The sitar master is now hailed as an “amazingly accomplished” musical powerhouse for his music’s “expressive beauty, rich tonal sensibility, and rhythmic intricacy,” as noted by the Washington Post, while the Times of India described Seshadri’s concert as “a show stopper that transported the audience to soak soul deep in his mesmerizing performance.” Songlines Magazine (U.K.) declared his album Sublime Ragas as one of the “Top Ten of the World’s” CD’s, as with his Raga: Rasa album, further citing him as one of the “world’s greatest sitar players.”

A confluence of multifarious musical influences steeped in the Maihar’s dhrupad & beenkar styles, Seshadri began his initial training with Shri Shankar Rao of the Vishnupur gharana (style). He further trained and toured worldwide with his acclaimed mentor, Pandit Ravi Shankar, not only establishing himself as his foremost protégé, but as a musician with a remarkably distinctive and unique style.

Seshadri’s solo engagements range from prestigious festivals in his homeland (India) to concerts in major venues, festivals, and universities around the world: the United States, Canada, Europe, Japan, Australia, Mexico, and the Middle East – from Carnegie Hall, the Kennedy Center, Lincoln Center, the Melbourne International Arts Festival in Australia, the Brighton Festival in U.K., the Ravinia Festival, the 2002 Winter Olympics in Salt Lake City to the Dover Lane, ITC, Sawai Gandharva Samaroh and Saptak Sammelans in India to name but a few. In 2005 and 2010, Seshadri collaborated with composer Philip Glass and the Brazilian instrumental group UAKTI on the critically acclaimed Orion project. In 2016, he was specially invited to perform before His Holiness, the 14th Dalai Lama.

Seshadri has received numerous awards and accolades for his contributions to the musical world including his nomination as the “Artist of the Month” by the prestigious Sangeeth Research Academy (SRA) in Kolkata (June 2011) and his 2014 honorary award from the Federation of Indian Associations (FIA) for his “incredible contributions, vision, leadership and expertise in the creative field … and as a true pioneer” of music and art. In December 2019 the Calcutta Music Foundation awarded him the prestigious “Sangeeth Samman” title, noting “his devotion, commitment and contributions which exemplify his values to the world of music.”

Seshadri is also a distinguished composer, collaborator, and educator of Indian Classical Music. His Quartet for a Raga was premiered under the auspices of the Contemporary Music Forum in Washington D.C. while his “Concerto #1 for Sitar and Chamber Orchestra” received its world premiere in San Diego in 2010. He has further composed for films, theatrical presentations and dance. As a collaborator, he has reached out beyond tradition and has worked with the likes of Philip Glass, Wu Man, Zakir Hussain, Swapan Choudhury, the Brazilian group UAKTI and Kayhan Kalhor to name a few.

As an educator, Kartik Seshadri heads one of the largest programs of Indian Classical Music in the US at the University of California, San Diego. He has been invited as a distinguished guest faculty member at various conservatories, universities, and academies around throughout world including The Banff Centre in Alberta in Canada, Stanford University, the Yehudi Menuhin School of Music in Bath, U.K., and the Sangeeth Research Academy (SRA) in Kolkata, India. In 2009 Seshadri launched Raga:Rasa – Kartik Seshadri’s Center for Indian Classical music and improvisation.